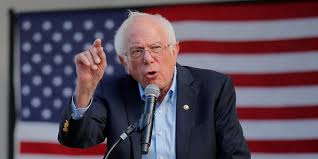 For all the talk about how Joe has lost his marbles, the one who has really lost his mind is Bernie whenever he talks about medical care.  Earlier this week I happened to listen to an interview he gave on NPR in which he referred to the ‘dysfunctional’ medical system which needs to be replaced by ‘Medicare for all.’  He said exactly the same thing about the ‘dysfunctional’ medical system when he was interviewed by Judy Woodruff earlier this year.

Bernie has been pushing this ‘Medicare for all’ deal because he knows that the words ‘single’ and ‘payer’ as in a single-payer medical system are too toxic for even a Socialist like him to trot out. The whole point of a universal Medicare plan, as opposed to Medicare versus Medicaid, is that we should all be entitled to the best medical services without having to pay cash out of pocket the way we do for Medicare right now.

What caught my attention, however, wasn’t Bernie’s promotion of single-payer health coverage under a different name, it was his reference to a ‘dysfunctional’ medical system. This guy has the nerve to talk about medicine as ‘dysfunctional’ in the midst of the COVID-19 pandemic which is now in its fifth month?  Is he that far away from reality, or is he just trying to keep some electoral skin in the game, or is he just dumb?

Our doctors, nurses, hospital administrators and  everyone else delivering health care have done an unbelievable job responding to a medical crisis which has truly been a Black Swan event. In other words, an event which before it happened couldn’t be imagined, couldn’t be predicted, couldn’t be prepared for in any way, shape, or form.

Let’s recall that the 9-11 attack on the World Trade Center in 2001 had been presaged by a massive bombing underneath Tower #1 in 1993. Following the first attack, the company which employed me had a subsidiary at the WTC and we initiated a monthly disaster-recovery drill which enabled every, single one of our 226 employees to get out and safely away before the tower came down. Could anyone have ever thought of doing a disaster-recovery drill for something like COVID-19?

Bernie’s idea that everyone should be covered by a Medicare or whatever he wants to call his comprehensive, government medical plan sounds like a good idea. But for something as complicated as medicine, the devil is always in the details, and the details don’t support Bernie’s idea at all.

In 2018, Americans visited physicians more than 880 million times, a number that may not include all those MedExpress storefronts springing up in shopping centers and strip malls. Less than 4% of those visits resulted in referrals to hospitals, and most of those visits are for tests, not palliative care.

There is no other country where the number of annual primary-care appointments exceeds more or less the entire population, in the U.S. the ratio is almost 3:1. And since less than 4% of those primary-care patients have illnesses that require more advanced care than what is delivered in the physicians’ office, the data clearly indicates that Americans like to go to the doctor, whether they really need to go or not.

Know how you change such behavior unless you want what the government pays out to be higher than the total federal budget every year? You ration health care. Find me one American who would support the idea of rationing health care.

The American medical system isn’t dysfunctional, it’s the only medical system in the entire world which is privately owned, privately managed, and privately insured. The reasons why we believe in the efficacy of private enterprise to deliver basic social services like medicine and education is a whole different topic in and of itself, but suffice it to say that maybe it’s the Oval Office that’s been dysfunctional in the face of this COVID-19 pandemic. Medicine, on the other hand, has been doing a stellar and remarkable job.

In the interest of full disclosure, the writer’s spouse is an attending physician at a teaching campus of a state medical school.