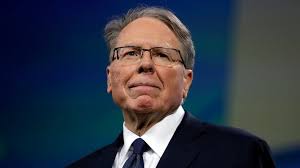 Until today, I was still convinced that I would wake up on November 4th good and pissed- off. Somehow, don’t ask me how, Trump would pull it off the day before and I would have to listen to him for four more years.

But today something happened which really made me think that he’s finished and done. It wasn’t the news about his niece writing a tell-all book; it wasn’t the comments made by Barr about Bolton’s forthcoming book which might be the dumbest thing that any Attorney General has ever said; it wasn’t even putting Ben Carson out there to explain how a lethal-force investigation should be done.

It was the delivery today of my monthly NRA magazine, The American Rifleman, which I have been getting for at least the last thirty years. Flipping open the cover, the first story I see is from my buddy Wayne-o, who is pictured with a determined look on his face and telling me “It’s Time To Fight!”

This issue of the NRA’s flagship publication marks the beginning of the organization’s effort to get the troops ready for the vote later this year. And like every national, state, and local electoral contest, it comes down to a contest between the ‘good guys’ who support the 2nd Amendment and the ‘bad guys’ who don’t. Generally speaking, the ‘good guys’ are Republicans, the ‘bad guys’ are you know who.

Back in 2016, it was no secret that the NRA would make no bones about their opposition to HRC. Not only had her husband savagely attacked 2nd-Amendment ‘rights’ with his Brady bill and assault weapons ban, but Hillary had made gun violence a central focus of her campaign. She had criticized Bernie for not voting against the immunity law that Bush gave the gun business in 2005, she then made it clear in the contest against Trump that if she were elected Chief Executive, there would be more gun regulations galore.

The NRA has always endorsed the Republican candidate for President, but until 2016 the endorsement was usually announced in the October issue of the American Rifleman mailed to subscribers less than a month before the vote. In a total and complete change in this long-standing practice, Donald Trump walked out on the stage of the NRA’s 2016 show in Louisville and received the organization’s official endorsement in May.

Over the six months, the NRA gave the Trump campaign more than $30 million, compared with the $13 million they gave Romney in 2012. Added to this money another $25 million the gun group gave federal and state candidates and together, the spending almost broke open the NRA piggy bank.

Not only was the money given to Trump by the NRA outsized by any standard, it allowed Trump to use his support of the 2nd Amendment to rally working-class whites, particularly white gun owners living in rural counties of critical swing states like Ohio and PA. I’m not saying that the NRA was responsible for Trump’s election in 2016, but it sure didn’t hurt.

So here we have in the latest issue of American Rifleman the opening volley for the 2020 campaign, an op-ed that runs nearly 1,000 words. The piece is basically the usual recitation of how Joe Biden wants to get rid of the 2nd Amendment, that if anything he’s worse than Hillary Clinton or Barack Obama, and as far as the NRA is concerned, 2020 will mark the “most dishonest, vicious, hate-filled anti-gun campaign that we’ll see in our lives.”

So I read the entire message from my friend Wayne-o and then I read it again. And what sticks out more than anything else is the fact that Donald Trump’s name isn’t mentioned once! And since Trump is running for re-election, shouldn’t there have been at least a paragraph on how hard he has fought for gun ‘rights?’

I’m not saying that we can sit back and not worry about the results on November 3rd. But nobody could have told me back in 2016 that the NRA would publish its first major editorial on the 2020 election without mentioning Donald Trump by name.