So now that the United States has registered 50,000 new virus cases for the third straight day, the country’s chief medical officer, or chief information officer, or chief scientist or whatever else Donald Trump pretends to be, has announced his latest ‘why you need to vote for me’ narrative in a speech at Mt. Rushmore in front of some 7,000 visitors, many of whom didn’t bother to wear masks.

By the way, before I get into what Trump said yesterday, I need to remind you that the number of Covid-19 infections isn’t going up. It’s the amount of testing we are doing which is going up. And this is because the country’s chief medical officer has singlehandedly created the world’s ‘greatest test machine,’ even though he doesn’t think that we really should be testing for the virus anyway. The previous sentence contains not one, but two Trump lies.

The newest polls appear to indicate that the number of people out there who aren’t sick and tired of his bullshit, his braggadocio and his outright lies are becoming few and far between. The latest Monmouth poll shows that Joe has opened a double-digit lead and even a slight majority say that ‘Sleepy Joe’ appears to have more stamina and mental awareness than President Trump.

When Trump first announced he was going to celebrate Independence Day at Mt. Rushmore, the Oglala Sioux Tribe, which happens to own the Black Hills, told him to stay the f— away. Not only did Trump disregard what the Tribe had to say, but he announced he was planning to ‘create’ a national garden of American heroes, an outdoor park with statues of “the greatest Americans who ever lived.”

I can just imagine the people who Trump would like to memorialize in this park. How about we start with James Earl Ray? And just to keep things gender-equal, why not a statue of Patricia McCloskey, the St. Louis personal-injury attorney who waved a gun at some Black Lives Matter demonstrators walking past her home?

The truth is that Trump can’t ‘create’ a public monument of any kind without the approval of Congress because even though he probably doesn’t know it, the President of the United States doesn’t happen to own any Federal Government land at all. But maybe he’s thinking of a private amusement park. He can build it on his Doral golf course which, along with the hotel he owns next to the White House, is currently going broke.

Meanwhile, just to make sure that the virus won’t be mentioned in his next appearance on the Sean Hannity show, Trump told the crowd at the Black Hills that the election was going to come down to one thing: do we let the Democrat-led mob destroy everything and anything that made the country great? And it’s not just a problem of physical destruction of sacred sites, it’s also a campaign to mentally destroy America because “our children are taught in school to hate their own country.”

By the way, whatever happened to the wall?  Whatever happened to the new trade deal with China? Whatever happened to North Korea’s ‘agreement’ to get rid of its nuclear arsenal? These were all events touted by Trump as great achievements except none of these so-called ‘victories’ ever occurred. For that matter, for all his bullshit and bluster about how he has ended troop deployments overseas, we still have 14,000 soldiers in Afghanistan, and now it’s coming out that Russia might have been paying the Taliban to kill our uniformed boys and girls over there. Of course Trump didn’t know anything about this issue, of course he didn’t. 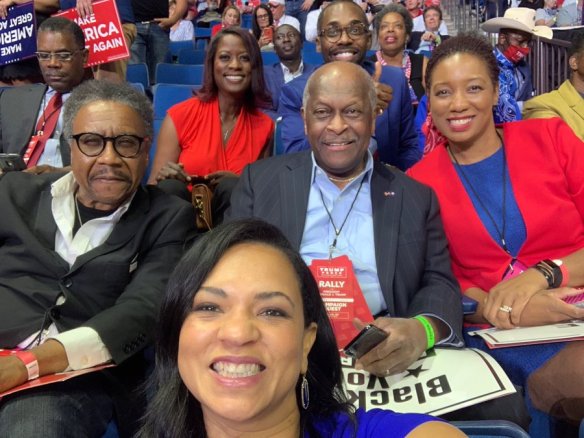 Remember Herman Cain, the pizza guy who briefly ran for President until he was derailed by a sexual-harassment charge? He attended Trump’s ‘big’ rally in Tulsa and is now sitting in an Atlanta hospital receiving treatment for a rare infection known as Covid-19. He’s hoping to be released from the hospital in time to vote for Trump because he didn’t bother to wear a mask at Tulsa since nobody needs to wear a mask.

Just remember: If you wear a mask you’re saying that you want to tear down what made America great!