Today’s Covid-19 report couldn’t be better.  We’re really heading in the right direction and doing very well. Despite all the whining and crying by the liberal media, the anti-Trump Republicans, the Deep State terrorists and everyone else who has been trying to keep our beloved President from making America great again, the fact is that the United States has the lowest rate of Covid-19 mortality of any country in the world!

That’s right. It’s a fact.  How do I know it’s true? Because President Donald Trump announced this fact on Twitter yesterday.  Here’s what he said: “We have the lowest mortality rate in the world.” He said it. So it must be true.  I mean, how could it not be true? Has Donald Trump ever said anything that wasn’t true?

You can find current national mortality numbers on the Johns Hopkins Covid-information website, and the numbers are presented in two different ways. Here are the country numbers by case-fatality ratio, which means the number of deaths divided by the number who test positive for the disease: 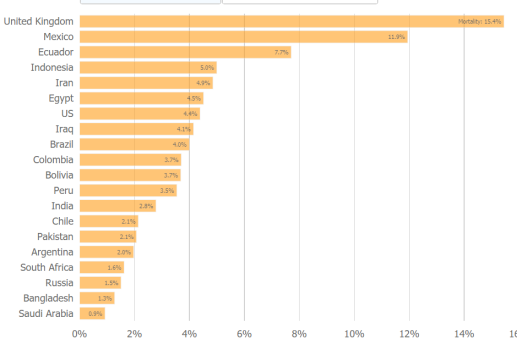 Notice how the case-fatality ratio for the United States is way down at the bottom. Yea, right.

Here are the numbers of deaths per 100,000 population, meaning the total number of virus deaths divided by the size of the country’s population as expressed in units of 100,000:

Notice where the United States stands on this list. Again, right at the bottom, okay? And by the way, both lists contain the 20 countries which have experienced the highest number of Covid-19 infections. If the list were comprised of all countries worldwide, there would be a lot more countries ranked below the U.S.

Which raises an interesting question. Does Trump either know or care how full of shit he really is? I don’t know the answer and neither does anyone else. Maybe we’ll get some insights when Mary Trump’s book appears.

Which brings us to the next question. What difference does it really make whether Trump’s full of shit or not?

I ask the second question because the day after his inauguration, Trump announced that the event had attracted the largest crowd ever to attend the swearing-in of any President, despite the universal view that the attendance had been, in fact, quite small. The picture on the left was Obama’s 2008 inauguration; the picture on the right was Trump’s inaugural, taken from the same location at exactly the same time:

This claim was such a complete and total lie that even Fox News called Trump out on the deceit.

There are now multiple media venues which report the number of lies Trump tells every hour, every day, every week and every month of his administration from then until now, with the Washington Post stating that as of the beginning of June, Trump has made “false or misleading” claims 19,128 times.

What I find interesting in this ‘war of words,’ so to speak, is that the media continues to cover Trump’s braggadocio and bullshit as if it’s real news; i.e., something that qualifies to be reported at all. If Trump were actually doing something in response to the virus, maybe we would need to know what’s on his mind. But he’s not doing anything except shooting off his mouth, so who cares what he says?

At the same time that Trump was celebrating our ‘lowest’ Covid-19 fatalities on Twitter, he also threatened to withhold federal aid to education for school systems that don’t reopen in the Fall. He knows for a ‘fact’ that this is nothing more than another conspiracy by the Deep State educational establishment to make him look bad and drag down his numbers on November 3rd. He actually said words to that effect in the tweet.  He then signed off by once again invoking the power and majesty of the Silent Majority which is “stronger than ever.”

Sorry folks, but none of this is news and none of it deserves to be mentioned, never mind reported by any self-respecting media source.

Please join me in wishing that our esteemed President would shut the f— up and go away.